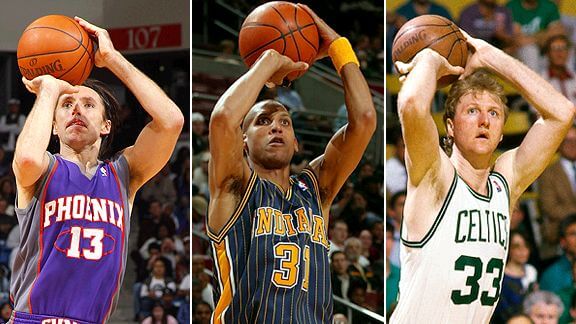 Studying the NBA’s greatest shooters has taught me there isn’t one perfect technique. I mimic Steve Nash and Steph Curry with the ball coming to my forehead before it’s released toward the rim. Kobe Bryant brings the ball above his head before his follow through and Larry Bird brought it completely behind his head. Reggie Miller’s elbow pointed out and he had an obvious thumb flick with his guide hand. He shot close to 40 percent from beyond the 3-point arc and almost 90 percent from the line. These are just release points. I didn’t even mention their stances.

How can they all be so successful, yet so different?

For starters, the great ones have repeatable form. Through countless hours of practice and repetition, they have created a consistency in how they shoot the ball that’s comfortable to them. It’s the same technique every time and when they do it incorrectly it’s identifiable.

How? They feel their shot.

I’ll get more into the feel of shooting a basketball later, but let’s first consider the starting point for most players. When athletes come to me, they often have preconceived notions about what their shot is, but have never taken the time to study themselves on film. Their lack of confidence stems from whether the shot is going in and what others are telling them. They’ve been told to focus on their feet, their elbow, hand placement, release point, balance and before they know it, they are so wrapped up mentally in all the things they think they should be doing, they can’t concentrate on the actual goal of putting the ball in the basket.

Letting go of judgmental thoughts is one of the first steps toward becoming a great shooter. Assigning a negative or positive value to a shot can be problematic because it promotes the thinking process. If the shot is good, a player starts to think, “How can I do that again?” If the shot is poor, then he/she is doing everything he/she can to correct it. As a result, the mind races, muscles tighten and the stroke becomes less fluid. The negative evaluations only become more likely as the intensity grows.

I have found the most successful first piece of advice when building a jump shot is to encourage the player to see and feel what he/she is doing. The seeing is done through film study. We let go of preconceived theories of how players shoot and rely on a non-judgmental approach to discuss the form as it is currently displayed on video. From there, that image is replayed over and over in an athlete’s mind when we discuss his/her jump shot. Corrections are made easier because he/she can compare the picture with the feedback.

As stated in “The Inner Game of Tennis,” the feeling leads to the knowing. If you want to improve the feel of your jump shot, learn to let it happen. The next time you go out to shoot, stand no further away than the free throw line. Close your eyes, practice a few reps by just bringing the ball up to your shooting pocket and visualize the ball going through the net. It’s important to feel the ball’s path to the top. Next, focus your mind and eyes solely on the laces as you spin or bounce the ball a few times, then set your eyes to the rim. From there, it’s about doing whatever you need to let your body make the basket.

​Whether you make it or miss it, try again. With each repetition, there’s only one thought process: put the ball in the hoop. In time, you’ll find that refraining from the “how-to-do-it” mindset frees the body to use its amazing ability to self-correct. While your shot may look different than others, you have taken the first step toward finding the form that feels most natural to you.